First let me point out that I have tried much different type of food and guides from different sides. Some were useful others did not work for us.

I think we did a lot of little things wrong when we first got Jørgen home. He would not really eat from the start and we went in panic. I had bought a whole lot of Bulldog puppy food, but nothing he would eat. I had to do something because my puppy at the age of 10 weeks had not eaten in 2 days. Hats off to those who can go on for a long time offering their puppy food for 10 minutes, take it away and then offer again several hours later. For me it is important that such a young puppy eats each day.

But as we realized that he didn’t really wanted to eat the royal canine food, we went to something we got from the vet. It was a success for 2 days, and then we were back to square 1. Then we started the wild hunt and advice came from all sides, however, the advice was very different and I couldn’t make heads or tail of it.

When I look back I would have stayed on the first kind of food, so he did not learn that if he were patient for a long time, then he would get something else. At the age of 10 weeks, he would have been eating after 1 day or 2.

All the time we have had Jørgen as the only dog, we were struggled to keep fat on his body. Everything changed when we got Max home. He would eat us out of house if he were allowed. He got the Max out of his food from day 1. The first week he had to teach Jørgen that if he didn´t eat, then the “rival” came and eat it. Max ate twice as much the first week. After the first week Jørgen got the point. He ate and ate, sometimes he ate faster than Max, and it was Max who was pushed to one side. It was lovely. Quietly Jørgen got a little fatter, his body got more to work on and his muscles and head grew bigger. Now we give them the same amount of food in the bowls, they change place if they want and that work for them. Jørgen is a bit strange at some points; he must go straight out and have some water in the middle of his the food. During that time, Max is also having a break for his meal. He sits and waits until Jørgen comes back so they can finish their meal together. Jørgen do not drink water in the water bowl inside, he has an idea that the water outside in another water bowl is much better. Or the water from the river that runs in the bottom of our garden. Or in the wintertime he eats snow to satisfy his thirst. 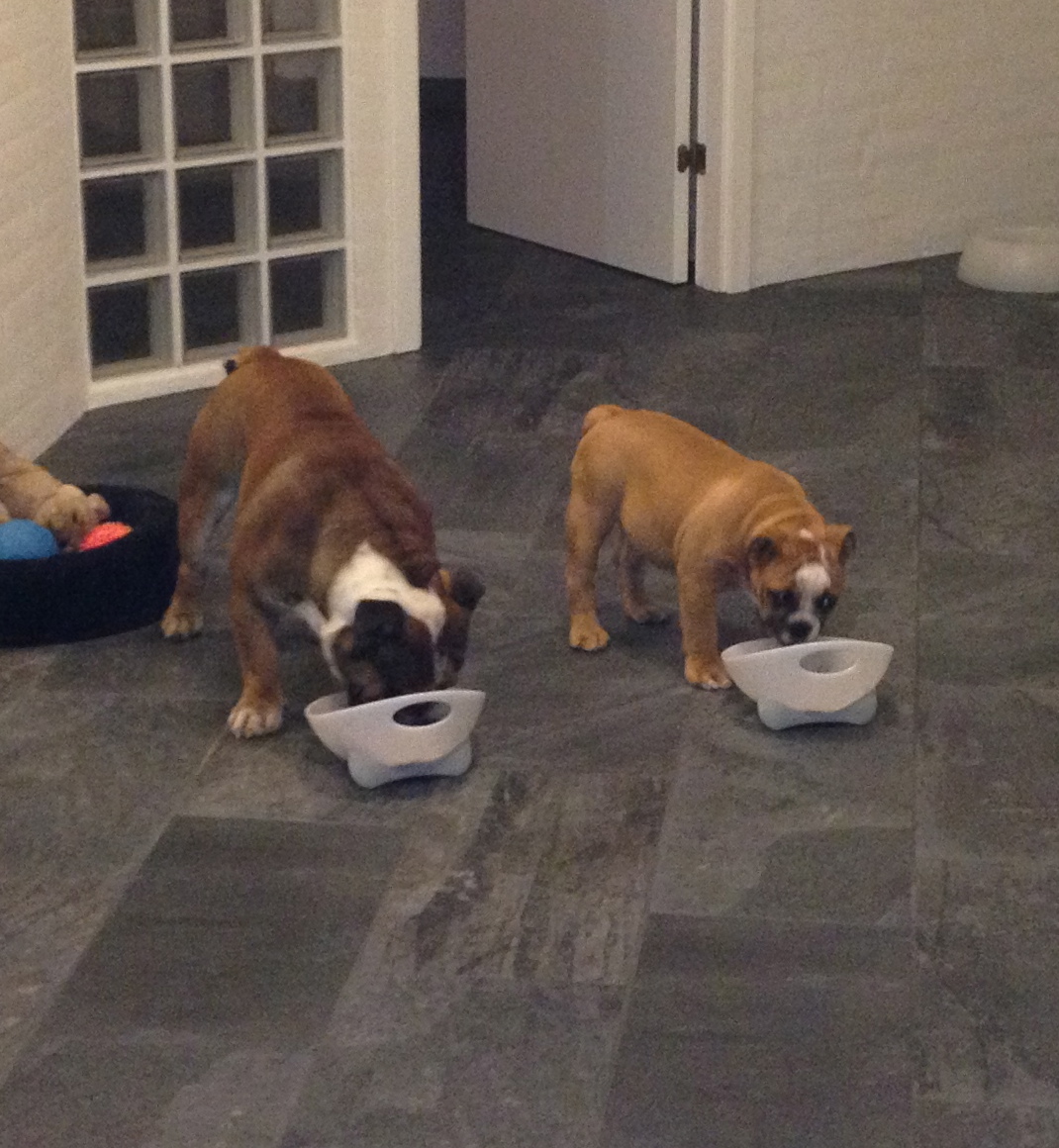 I feed with BARF, it fits very well with Jørgen, Max and us humans. Likes the idea of my dogs eats as naturally as possible. It is good for the teeth and for my dogs system. Easy to give worm treatment and different pills.

Many believe that feeding with BARF is very expensive then normal dog food. It is more expensive than the cheap food from the supermarket, but you just have to thing about what they put in to the food as filler. There must surely be enough meat in all food, But what is besides of the meal, what kind of meat and what kind of filler have there been used. If we are to provide twice as much cheap food to cover the dog needs, it must be at least twice as cheap. The dogs system will work much more and the more the filler is present in the food, the more will the dog poop.

When I fed with pills. I didn´t look much on the price, but on the content of the meat, berries and particularly div. filler. If I wanted to feed my dogs up on wheat, I had given them bread.