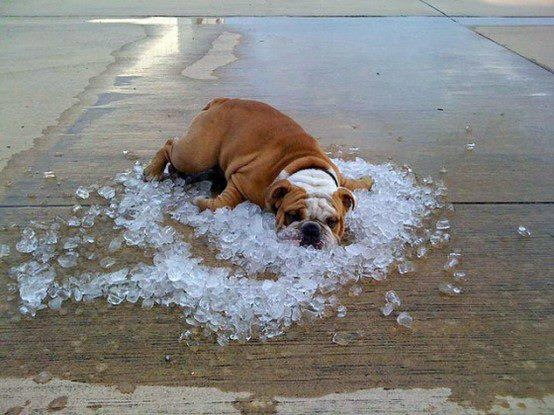 DON'T take your dog outside during the day. Shut him in a room with a cool floor and draw the curtains to keep the sunlight out, if you do this early enough it will prevent the room from becoming warm as the sun comes into the room. Have an electric fan running in the room to keep the air circulating and make sure there is fresh water available at all times, put a dribble of apple cider vinegar in the water, it will help keep the phlegm levels down.

IF he needs to go outside - GO WITH HIM, don't let him lay out in the sun and bring him straight back in again when he's been to the  toilet. Spray him with cold water if necessary to keep his skin cool.

If you are not home DON'T let him have free access to the garden, he WILL sun bathe and you will not be there to see when he's been out for too long.

DON'T walk your dog in this weather, it's still very hot at 8 or 9pm, wait until it's very late or walk very early in the morning -  remember that tarmac also takes a while to cool off and even after the sun has gone down the roads can be very hot still.

DON'T force an overheating dog to drink water, offer water, but if refused don't force the issue. HE WILL DRINK IF HE WANTS TO - the worst thing you can do is force him to drink, he could vomit and choke. You can make some ice cubes with glucose powder in the water to feed to him so he takes in fluid without guzzling too much water at once.

MAKE sure NOW that you have in your cupboard a squeezy jiff lemon, use this FIRST if your dog is overheating, squirt it into the back of  the dogs throat - it will break up the foam/phlegm in the throat. (Your dog will hate it but who cares)

LISTEN to your dog, panting is fine, this is the only way your dog can lose body heat, but listen for a roar - best described as sounding like an asthma attack. If your dog starts to roar IMMEDIATELY stand him in cold water, dogs only sweat through the pads of their feet and standing him in cold water has the same effect as putting a cold flannel on your head when you are hot.

IF HE'S ALREADY TOO HOT - Keep him stood in a bath of cold water, pour water over his head and especially around his neck, you need to cool the blood going to the brain, in severe cases of overheating there is a risk of brain damage from hot blood going to the brain. (Don't turn the hose pipe on him, it may panic him and make him worse).

Place ice under his tail (just inside his bottom if you can), keep pouring cold water over him and KEEP CALM, if you panic your dog will panic - if you suffer from asthma you will understand what I mean.

Your dog will go very pale as the circulation system struggles to cope.

Keep going with the water - don't take him out of the bath until the breathing has calmed down, talk calmly to your dog - you will be soaked, your bathroom will be soaked, but you will save his life!!!!!!!!!

Once the breathing is calmer, remove him from the bath but don't dry him, he will shake up your walls and over you WHO CARES!!!! He will still be very pale (inside mouth, gums and inner eyes)

Let him wander, don't make a fuss of him, your fussing may panic him and it could start over again. Still don't force him to drink, but make up a rehydration mix and place it in a bowl for him to drink from if he wants to. You can make up your own rehydration mix:

This mixture will keep in the fridge for 24 hours, or make into ice cubes to use as needed.

If you cannot calm the dog in the bath GO STRAIGHT TO THE VET!!!! Soak a towel in cold water and lay the dog on top of it for the journey, take packets of frozen veggies and lay them on the back of his neck and on each side of his body. If the dog will lay upside down it will help him cool faster through his belly which has less fur on it but make sure that someone is with him to ensure he doesn't swallow his tongue!

IF YOU ARE AWAY FROM THE HOME: Find a river, pond, cow trough or knock a door, 7UP will do the same as the lemon juice in an emergency. Get in the river with your dog if necessary (many bulldogs cannot swim) but don't take him out until the breathing is calmer, unless he is obviously passing out in which case risk a speeding ticket and get to the nearest vet.