We are a small family of Klaus and I, we would like to expand with a few children and hope it comes off. In the year 2012 we bought a house in a small town called Vildbjerg, Denmark. Here we got what we wished for. A garden and a nice house. A place not far away from shopping or schools for our future children, and we didn´t  want the feeling of having neighbours on all sides. My name is Mai and I work for my boyfriend Klaus. He is personnel manager and co-owner of a company called Handicapformidlingen. We make our living by helping people with disabilities that have a BPA system throughout Denmark.

For us, the choice fell on the English bulldog as pet dog because Klaus had seen a bitch on a farm, where he didn´t felled in love at first sight, he found the breed really weird and ugly. Where we both come from the bulldog is not a normal sight in the streets.

Klaus quickly fell in love with the breed English bulldog all thought. Because it is such a special dog, so he had to own one for himself. Klaus was looking for a while and found Arthur. Arthur was not from a good breeder, he did not look quite like breed standard, but he was still nice by nature. They had many wonderful hours together, but unfortunately died Arthur at the age of 6 years after various complications with his health.

While Klaus had Arthur he was to different shows here in Denmark as a guest, to see the breed and find out witch kind of looks he preferred. For the exhibition in Herning 2005 in Denmark he saw a really great dog named Two Riwers Darwin. He decided that he wanted a puppy from the kennel when he got the chance.

It took a few years, Klaus and I got together. I love all animals, with the exception of Dermaptera, so it was written in the cards. It wasn’t long before we were talking about a dog, Klaus wanted an English bulldog and it should be from the Kennel called Kinibox. I wasn´t in love with the breed, because I was more liking larger dogs, as I have grown up with Great Danes. Klaus convinced me and one day I found Kinibox 'website, they had puppies and we made contact with them. After writing back and forth with Hennie and Elco, telling who we were and etc. In collaboration with Kinibox we chose a male puppy, a few weeks after we went to the Nederland’s and retrieve Glory Hunter Kinibox called Jørgen in everyday speech. 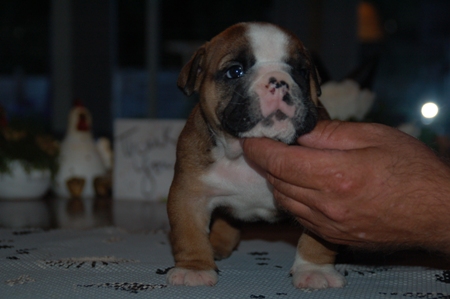 A new lifestyle was apron us and we had a new way of living.

I haven’t really been interested in exhibitions before, but we agreed that if we were to buy with a pedigree we could go to shows for fun.

We didn´t know how we were suppose to do, but then came YouTube.com to my help. After a little time I could see that it was probably a good idea to train, both me and the dog, for the thing going on in the ring. Then the wild search of finding a group where they trained the dog in standing still was started. It seemed a little silly in my world, but a challenge is always welcome at our home. Coincidentally, while I went to puppy training in the Danish Kennel club with Jorgen I heard of a personal group that trained every Wednesday evening, and there was time to socialize and talk afterwards with a cup of coffee. It was great fun and super cool that Jørgen could be allowed to play with the other dogs’ afterword and I got a super tired dog home. There were also other English bulldogs, it was nice to be able to talk about the breed and get some answers to my questions.

When Jørgen became 1 ½ years old it was time for dog no 2 in my opinion, and I got Klaus convinced. Jørgen had reached the stage where he listened to what he was told and knew what he was allowed. No 2 would also be a male and this time I had spent a long time trying to figure out what type I wanted and why. The choice was Nobozz Maximus called Max. Getting dog No. 2 is a really good decision for us, but especially for Jørgen. They have really good use of each other for both cheerful hours and playtime. There is nothing better than to see the 2 in the garden for a walk, smell the same and peeing up the same tree, or sleeping while holding paws. 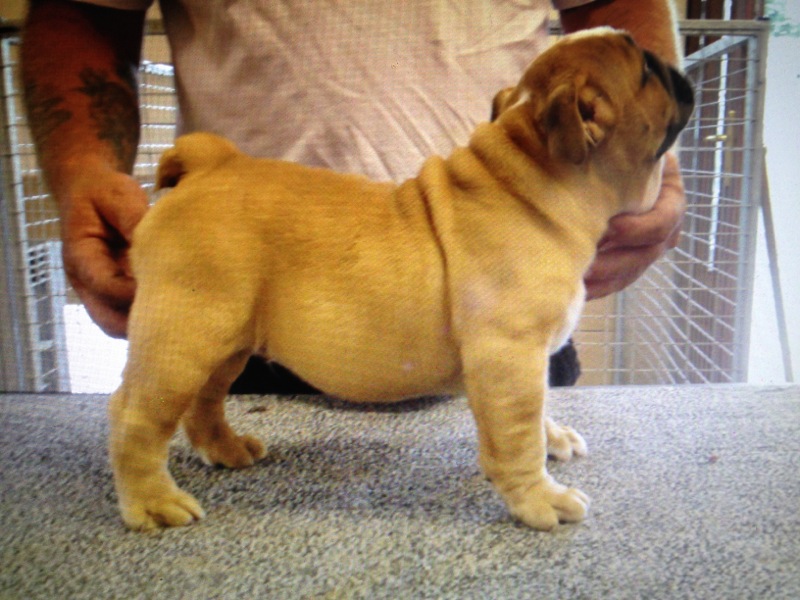